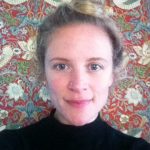 Helen Venn – is trained in dance & movement, & as well as Many Directions, works on a wide variety of projects working with everyone from small children to the elderly, helping people to discover & enjoy their bodies & what they can do. She’s the proud mum of two small children herself & enjoys nature. Her favourite food is chocolate. Any sort of chocolate. As long as it’s chocolate… 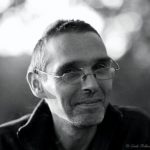 is – has been doing drama & theatre with people with learning difficulties for over 30 years (he started very young, honest…). As well as this, as this, as Artistic Director of Wolf + Water Arts Company, works all over the world with refugees, children arisk, people with mental health issues & many many other groups. He has many favourite foods provided there’s not too much of any of them. 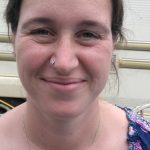 Sam Remnant worked with people with learning disabilities & theatre in Southampton for many years, before relocating with her family to North Devon to live in a converted horse trailer just over the hill from Woolacombe beach. As well as theatre she does storytelling for children. Her favourite foods are pasta &
chocolate – & if she could eat them in the same dish at the same time, she probably would.

Chris Heard  has worked alongside adults with learning disabilities since 1982. He helped set up Silver Enterprise Theater Company which later became Many Directions and has enjoyed assisting Wolf and Water in the past with groups and productions. His favorite foods are fruit, nuts and toast. 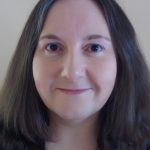 Elisa Hurley is first & foremost Steph’s Mum! She enjoys listening to live music, and trips to the theatre and cinema – though she notes that “the films I choose usually have very small audiences!” She is also very interested in Art, and Social History. Her favourite food is curry. 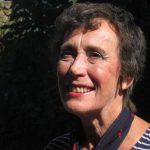 Margaret Jewell is a retired Drama teacher. She first collaborated with Wolf and Water many years ago when some of her students were involved in their productions.In retirement,she is delighted to be involved with Many Directions once more.She enjoys performing,and is a very proud grandmother. Favourite food…..anything that comes from the sea!

Gayle Bennett – is Craig’s Mum. Living in a village on the edge of Exmoor, having moved there from Leicestershire where she was a teacher working with children with behavioural problems, she now spends her time walking, swimming, working with animal charities and looking after a veritable small zoo of assorted pets.

Some of Our Members

This is just a snapshot of a few of our current members to give you an idea of the range of magnificent folk we work together with: 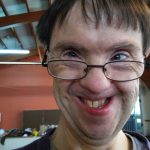 Simon – is a veteran of Many Directions – indeed he was in our first ever show (long before Many Directions existed) “Snow White & the 23 Dwarfs” (it was a large cast!) back in 1989 & has been in most of our productions ever since. If there was such a thing as an “Award for North Devon’s Nicest Man” Simon would probably win it consistently year on year. He is a great singer, a huge Doctor Fan & his favourite food is a good old roast dinner. 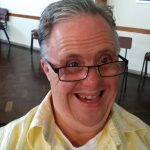 Craig is an energetic member of our group & has been in many performances. As well as being in Many Directions he works as a gardener two days a week & an upholsterer one day a week. He is a great lover of animals & has numerous pets. His favourite music is Queen. 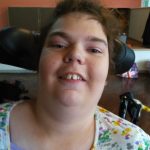 Steph is an enthusiastic member of Many Directions. She may not always follow the lead, but she will always be herself! She regularly enjoys visits to the theatre and cinema, listening to music and expressing her “girlie attitude”! Her favourite food is ice cream. Steph’s favourite film is Mamma Mia and her favourite dance tune is Dancing Queen by ABBA! Her favourite tv programme is Strictly Come Dancing! 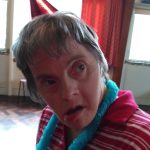 Susie has been involved in Many Directions for many years. She finds mobility difficult these days, but can do some funky chair based wriggling. She particularly likes sheep & can deliver an awesome rendition of Dolly Parton’s “Jolene” 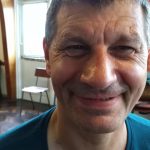 John loves model cars & listening to his radio. He’s also really good at doing the dishes. With his shades & baseball cap, John’s a right cool dude – but can’t start the day without his daily breakfast of crumpets…. 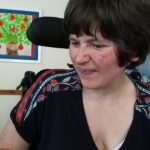 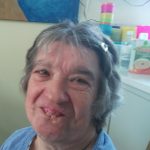 Maggie – is another Many Directions veteran of stage & screen who we first started working back in 1989 with long before MD was created! Always a snappy dresser, she’s rumoured to have one of the biggest collections of cardies in North Devon. She loves arts & crafts, & having her finger nails painted. Her favourite food is sweets – but she’s not allowed them!